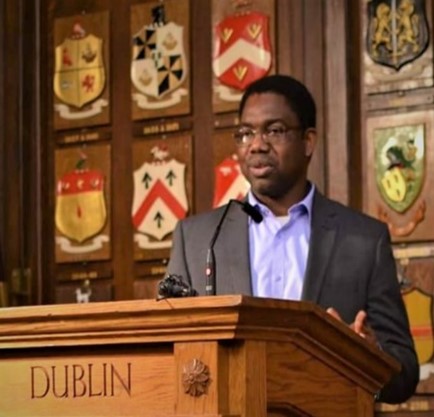 Lassane Ouedraogo is a devoted Pan-Africanist, Human Rights, Global Social Justice Campaigner with a field of expertise on Migration, Asylum and Refugees issues and in Community Development Participation. Board member and spokesperson of the European Network of People of African Descent (ENPAD), he is a founding member of City of Sanctuary Dublin and former Board Member of Places of Sanctuary Ireland who has supported the Sanctuary Movement since as a spokesperson and advocate for many years as a network of groups in towns, cities and local communities which share the objectives of promoting culture of welcoming, integration, inclusion and the welfare of refugees, asylum seekers and vulnerable migrants.

He is also a founding member and former national coordinator of the Campaign to End Direct Provision System in Ireland and has worked with numerous NGOs since coming to Ireland from his Native Burkina Faso including Human Rights and Anti-Racism Networks, Irish Refugee Council, Sport Against Racism Ireland (SARI), and had been very vocal about the difficult realities of living for years on end in the Irish reception system, known as Direct Provision.

Lassane is a DCU graduate in BA (Hons) in International Relations and works in Trinity College Dublin as Academic Executive Officer and Chairperson of the Africa Solidarity Centre Ireland.

His great passion on Human Rights issues led him to work with marginalised ethnic minorities in Ireland, European Human Rights Activists and NGOs; and the African Diasporas where he is engaged in promoting equality by bridging the gap between those communities and policy makers.